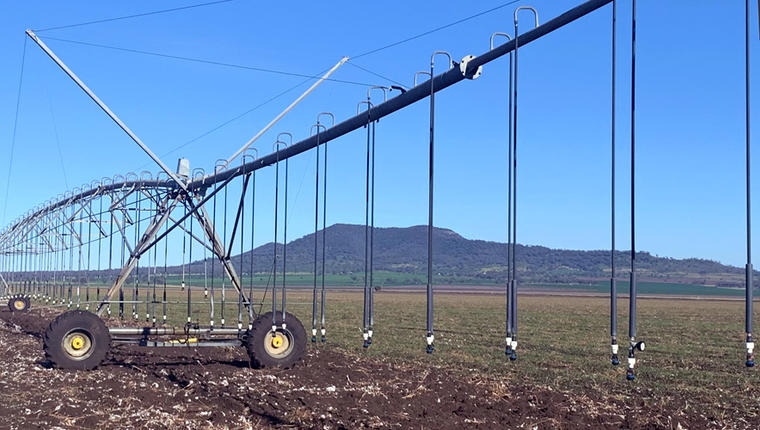 Will Ronald farms more than 2,000 hectares (4942 acres) south of Gunnedah, NSW. He returned to his family farm, The Point, during one of the worst droughts to impact the area in decades and knew he would need to invest in the land to survive the drought.

The farm is mainly dry land except for 337 hectares (832 acres), which are covered by three center pivots —one TL hydraulic and two Bauer machines. The TL machine was close to 20 years old and giving him issues with dry spots or stripes, so Will decided it was time to upgrade the sprinklers and pressure regulators.

Some local farmers had switched their sprinklers for LEPA bubblers and spray plates on linear machines, which caught Will’s attention. He had some knowledge of the advantages of LDN sprays and the use of bubble applicators, so he investigated further.

He researched ways to save money by reducing his operating pressure and pumping costs through the combination of low-pressure sprinklers and LEPA bubblers that would reduce both wind-drift and evaporation losses. Though his TL pivot was older, upgrading his sprinkler package could lower system pressure by 0.62 bar (9 psi). The saving from switching to lower pressure regulators was approximately $3,600 AUD per year in pumping costs, which means that the adjustments made to the new system would pay for themselves over the next few years.

In the summer of 2020 and the middle of a drought, the LEPA upgrade gave Will 8.5 bales per hectare with just 2.5 mega-liters of water per hectare. In a normal year, Will believes there would have been some summer rains in this region that would have made the yield higher. But he found that he could still use less water and get a reasonable outcome during a drought year.

With a small budget and environmental conditions against him, Will could still get a good return on investment by simply making some smaller adjustments to his sprinkler package.

The Bauer machines also received sprinkler package upgrades. They now use the i-Wob®2 operating at 1.03 bar (15 psi) in the first few spans to reduce over-watering at the start of the machine. LDN LEPA bubblers with 0.41 bar (6 psi) pressure regulators are mounted on the middle and outer spans of these 724-meter (2375 ft) machines. He also reduced sprinkler spacing across the length of the machine to 1.4 meters (4.6 ft) with the addition of 125-degree double goosenecks and truss rod hose slings. 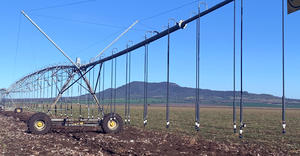 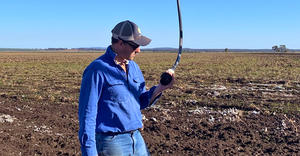