Increasing Sugarcane Production by 25% in Guatemala with Xcel-Wobblers 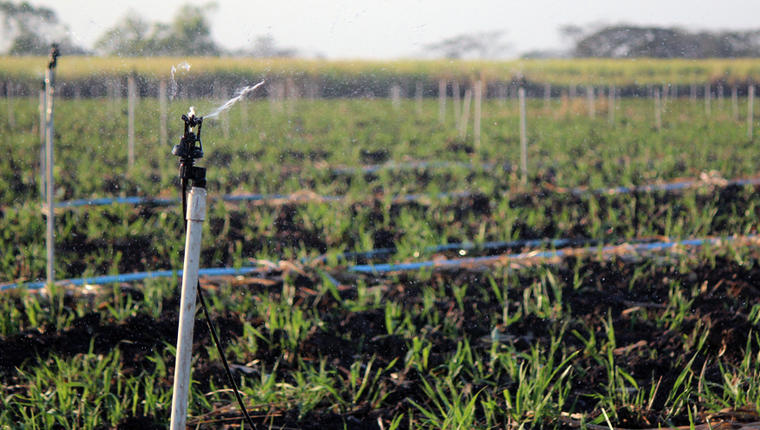 Guatemala is the third major sugarcane producer in Latin American and the Caribbean and the fourth major exporter worldwide, representing 5% of total world exports.

Sugarcane planted area in the country has been expanding by an average annual basis of three percent for the past ten years, with production increases highly dependent on both yield increases and sugar extraction efficiency.1 This means that areas with quality soil are becoming scarcer.

One large sugar cane producer decided to take the chance and begin producing sugar cane in an area known for its poor soil quality. The land is rocky and soils are shallow and dry, meaning irrigation is a necessity.

Sugarcane production is a water intensive process, so drip was initially installed to try and maximizing water efficiency. However, due to the harsh soil conditions the system was unable to help produce high enough yields.

Senninger recommended converting the field from drip irrigation to an overhead sprinkler system equipped with high-angle Xcel-Wobblers and pressure regulators.

The sprinklers were installed at 30 x 30 ft (9 x 9 meter) spacing and set to operate at 20 psi (1.38 bar). This would ensure adequate overlap between sprinkler heads for a distribution uniformity of over 90%.

The treatment, fertilization, mechanization, amount of water applied has been the same for all tested methods. The only difference is the way the water is applied. This is due to the size of the droplet and type of droplet. The soil is kept better aerated and oxygenated and that benefit translates into greater yield.

The growers believe that this significant variance in uniformity is the main reason behind the 25% difference in metric tons yielded. The Xcel-Wobbler has a larger, more consistent droplet size than most overhead sprinklers. This means that there is less water loss due to wind and evaporation, and the soil is kept better aerated / oxygenated. This then translates into the increased yields. 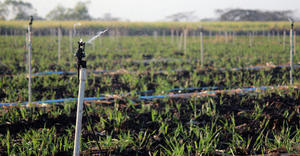 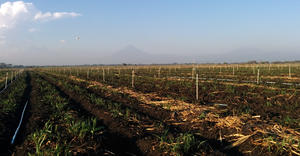