Senninger Releases the i-Wob®2: the Next Generation of Senninger® Wobbler® 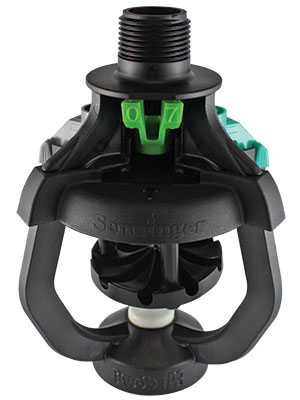 Senninger is pleased to announce the release of the i-Wob2, Senninger’s longest lasting pivot Wobbler.

The i-Wob2 is designed to last longer in the field, which means growers will not need to invest in sprinkler package replacement as often.

Its new protective shroud guards the i-Wob2 and protects the sprinkler’s wear surface from the splashing of adjacent sprinklers, grit, and direct UV damage. Plus, the wear surface itself has been enhanced.

These improvements enhance the i-Wob2’s longevity and make it capable of better withstanding harsh operating conditions.

The i-Wob2 is backed by an unprecedented three-year warranty on materials, workmanship, and performance.

The protective shroud also doubles as a nozzle carrier, making it quick and easy for growers to renozzle during the season. Growers who need an extra nozzle to irrigate winter crops or prefer to tailor-manage their resources won’t need to carry tools or parts into the field.

With four different models that produce multiple droplet sizes and trajectories, the i-Wob2 is suitable for virtually any field or situation, including windy conditions, difficult soils, high profile crops, and more.

Wobbler technology utilizes grooved deflectors to divide a flow into numerous streams of water but keeps them in a constant wobbling motion to further divide each stream into consistently sized droplets.

This consistent droplet size is what helps maintain a sprinkler’s pattern integrity against wind-drift and evaporation. The technology was introduced by Senninger Irrigation in 1978 and became an industry standard, making the original i-Wob the most imitated sprinkler on the market. 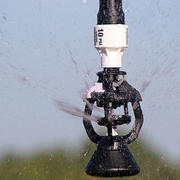