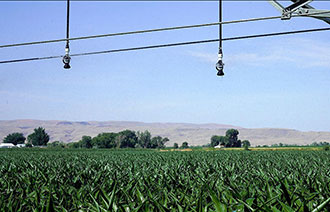 Ryan Leatch, Clodia Sihlangu, and Challen Lootens farm in different regions around the globe, quite distant from each other. But they share a passion for farming and know that keeping up with efficient irrigation practices is vital to keeping their operations profitable.

This concern prompted them to implement similar energy-saving solutions in their farms. All three growers upgraded their irrigation systems with low-pressure sprinklers that brought significant energy savings:

Energy Savings Across the Globe

Corn grower Ryan Leatch was using travelers to irrigate his farm, but they soon became a huge commitment he could not afford. His concerns about costs and the products he used prompted him to look for a better solution.

Ryan settled on a center pivot and chose low-pressure i-Wob®2 sprinklers coupled with 0,69 bar (10 psi) pressure regulators to try and improve his irrigation efficiency. This allowed him to irrigate at a rate of 18 mm a day using only 11 kW at the pump and reduced his energy expenses to approximately AUD 3.19 per hour. In addition, he obtained a final yield of 60 metric tons per hectare.

In South Africa, Clodia turned to a low-pressure solid set sprinkler, the Xcel-WobblerTM, to reduce system pressure and grow a healthier crop. “I can operate my system at 2 to 2.5 bar now compared to before when I had to bring it up to 3 bars,” she stated. “My cycles are shorter because I have a lot of water in a short space of time.”

In 2018, the new system further proved its value when it came time to harvest the sugarcane crop. Clodia saw a 36% increase in sugarcane production. That’s 116 tons versus the 85 tons of cane she harvested with her older irrigation system.

In the United States, Challen Lootens installed the same sprinkler as Ryan Leatch on his farm in Idaho. While initially looking for a solution to his sprinklers clogging due to high silt volume in the water, he found that lower pressure sprinklers were also helping him save money at the pump.

“Since using the product, it has reduced the amount of overall time that I have to run my machines resulting in less power usage as well as less wear and tear on my pivots and gearboxes. I’m having to use less water overall. I’m losing less from evaporation and things along those lines,” he said.

Pumping water for irrigation is one of the biggest sources of energy consumption on the farm. Growers cannot stop irrigating, but they can adopt new technologies designed to lower their energy requirements. The first step is replacing high-pressure sprinklers with more energy-efficient low-pressure options. 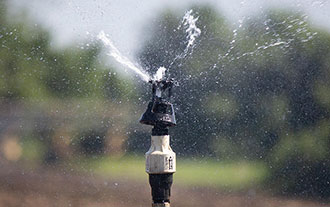 Systems that are more efficient use low-pressure sprinklers designed to operate with just 0,70 to 1 bar. These applicators reduce pumping demands without significantly reducing flow. That means crops can continue to receive a healthy amount of water. They also let farmers reduce their pump size or trim their impellers to minimize horsepower requirements.

Some low-pressure sprinklers, like the Senninger Wobblers, apply water instantaneously in a 360-degree wetted pattern. As a result, their application intensity onto the soil is very low, with the effect of replicating light rain. This helps maintain the soil’s infiltration capabilities. In contrast, high-energy impact sprinklers apply water in a concentrated stream, causing severe soil disturbance, surface compaction, and run-off. They generally take 60 to 120 seconds to cover their entire wetted area.

Energy savings vary depending on the specific irrigation system, hours of operation, flow, and pressure used. Still, growers can expect to see energy savings of about 50% with low-pressure sprinklers.