Looking Back at Early Pressure Regulators: An Interview with Mark Healy 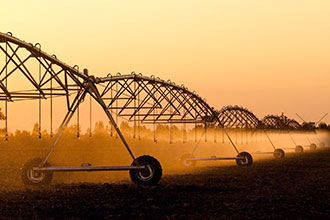 Like many great ideas, the concept of using pressure regulators in an irrigation system started as just a scribble on a paper napkin.  Mark Healy remembers sitting with his uncle, Joe Senninger, as Joe sketched his earliest prototype.  He then handed the concept to Mark, asking him if he could design it to be made of plastic.

In the mid-1960s, and Joe Senninger was at the helm of Senninger Irrigation, a company in its infancy.  Our main product was a plastic insect-proof sprinkler usually mounted above the orange trees on 21-ft riser pipes.   Joe noticed system flow issues in orange groves with undulating terrain where the lower areas received too much water while the higher areas received too little.  He knew about using pressure regulation in other industries and thought it would make sense to bring the concept over to irrigation.

The average design pressure of most orange grove overhead irrigation systems at that time was 50 psi.  “We first machined an aluminum model to determine the validity of the design and the relative size of the internal parts needed,” Mark explained. 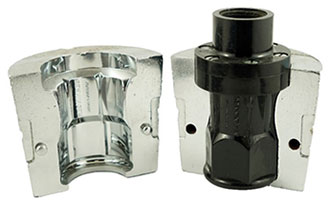 “With that knowledge, we made single-cavity molds for most of the parts to see if the concept would work in plastic as we hoped,” said Mark Healy.  “With our initial success, we made only a 50 psi pressure regulator.”

Back in the ’60s and early ’70s, there were not nearly as many plastics and plastic alloys available as there are today.   Joe and Mark molded several prototypes out of many of the different plastics available until they found a formula with the strength and chemical resistance needed.  It was a tedious process.  Each material change necessitated a mold change and offered a chance for product enhancement.  The first models were produced with a female ¾” NPT connections and 50 psi outlet pressure mainly for the overhead citrus irrigation.

The regulators setting above the orange trees and baking for a few years in the hot Florida sun brought about more necessary changes in the plastic composition and the diaphragm make-up.

“During the early ’70s, we broadened our range of models available by using different springs to achieve specific outlet pressures.  We then changed to a white upper housing and printed the pressure rating using a hot-stamp process.  Then we increased our production capacity by making multi-cavity tooling,” Mark said.  We also started making pressure regulators with ¾” and 1” NPT connection sizes.  With all these additional models and enhancements, pressure regulators became attractive to other markets.

Pressure regulators made their way onto center pivots during the 70s.  Mark recalls, “At that time, all models were made up of an upper and lower housing held together by stainless steel screws.  “Around 1980 we were challenged by a very good customer –Could we make a pressure regulator without screws holding it together?  While the current models worked perfectly fine, if we could find a way to eliminate the need for screws, the product would be much easier to manufacture, and it would be tamper-proof.

Mark took the challenge and began working with engineer Bill McFadden, drafting out concepts and testing designs, much like he and Joe had done many years before.  Eventually, they developed a design and assembly method, and using a specific plastic alloy, they were able to make a no leak snap-together regulator.

The materials used to manufacture pressure regulators changed over the years to better resin blends that could resist chemicals like liquid fertilizers and withstand extreme temperatures like those found in expanded global markets.

“Initially, we molded unreinforced diaphragms.  However, we soon changed to a reinforced material, Mark added.  “Our spring suppliers can now produce more accurate springs.  Additionally, we have tightened the tolerances of both our molded and purchased parts.”

No pressure regulator is perfect, but those with the highest accuracy are better at maintaining the desired outlet pressure.

With today’s low-pressure systems, pressure regulation is critical for maximum efficiency.  Most irrigation systems will experience pressure fluctuations or flow deviations that could easily produce overwatering or underwatering resulting in uniformity issues.  System pressure can change due to pressure loss through pipes and fittings, end guns cycling on/off on a center pivot, or zones shutting off or on in a nursery or open field.

Mark summarized, “Pressure regulators exist to maintain a system’s desired performance.  They more than pay for themselves by reducing water loss while helping to maintain irrigation uniformity and crop yields.  We appreciate the irrigation dealers who promote pressure regulation and the growers that use them.  We believe their use helps save water and energy –resources on which we must all focus.”