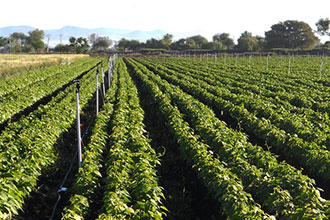 Today, low energy sprinklers like the Senninger Wobbler provide similar benefits to those achieved by drip. And they can accomplish that without the high labor and maintenance costs associated with drip installations.

Many irrigators who switched from drip to overhead irrigation with Wobbler sprinklers find this technology is a more durable and economical alternative with additional advantages.

These sprinklers require fewer laterals for operation and can even be installed in existing drip systems after some design adaptations. They don't require the same filtration as drip emitters because their larger nozzle size is less prone to clogging. Also, they are more visible, making it easier to assess performance.

While drip irrigation can use less water than overhead installations, it doesn't provide Wobbler sprinklers' versatility. Some growers, for example, prefer to use Senninger mini-Wobbler for germination.

Wobbler sprinklers are not just for water-efficient irrigation. Unlike drip systems, farmers can also use them for:

Salt Leaching: When the build-up of soluble salts in the soil becomes excessive, it can be minimized by uniformly applying more water than needed by the crop during the growing season. Water will move the salts downward, through, and below the root zone.

Wobbler sprinklers are ideal applicators for leaching salts. Their instantaneous and uniform pattern can help prevent salt pocket formation while letting the soil absorb the water at a rate it can handle. Other irrigation methods, such as localized irrigation systems, can leave salt close to the crop and root zone, usually at the edge of the wetted pattern. Deep percolation can be attempted with these systems, but they still tend to leave substantial amounts of salt in the soil.

Insect Control: The ability to spread water and chemicals from above or below the foliage area at low pressures and with high uniformity can be useful for insect control. In some cases, it is important to provide an application of insecticide over the entire orchard to control some fast-moving insects. The injection of pesticides into overhead sprinkler systems would allow to do it with ease.

Frost Protection: With their instantaneous 360° distribution pattern, Senninger Wobbler sprinklers are among the most effective sprinklers to combat frost damage. They gently apply an even and uniform water layer over plants to keep them always covered in ice.  As the ice encases the plant, it partially insulates it from the harsh exterior temperatures and prevents sudden heat loss. The droplets produced by Wobbler sprinklers are large enough to resist wind drift but gentle enough to avoid damage to plants. Their constant rotary action also prevents ice buildup and prevents the sprinkler from freezing.

Overtree Cooling: Wobblers can be installed above the crop canopy.  Small amounts of water applied throughout several short cycle irrigation events can lower crop temperature and raise the humidity of the air as the water evaporates. This reduces the water loss by transpiration. In addition, cooling can improve fruit color and quality, and prevent solar injury.

Irrigation-cooling is more effective if the application is uniform, which is why Senninger Wobbler sprinklers are ideal for this application. A uniform application can fully wet the surfaces that need to be cooled, such as fruit, leaves, and limbs. Systems that concentrate their streams in a smaller area are unable to prevent sun injury or ease crop stress.

Drip irrigation can indeed be the option for growers focused on water and energy savings. But those who need a more versatile system, lower overhead costs, and increased food production can achieve better outcomes with Wobbler sprinklers.

Aligned with our Corporate Social Responsibility goals, Senninger wants to become a zero-waste company by 2030. By reaching that goal, we will reduce our...

On 23 March this year, Senninger joins the Nation to celebrate National Ag Day by paying tribute to the many men and women who make agriculture possible....

Agriculture is the largest consumer of water with over 70% of the global freshwater withdrawals going to irrigated fields.1  Unfortunately, a large...