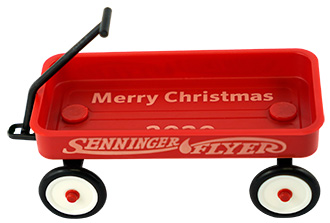 In 1983, we started a yearly tradition that brings us together as a real family to work in teams, be creative, and have a lot of fun. We wanted to do something nice for our customers at Christmas, and one employee came up with the idea of sending them an ornament. That is how the Senninger Christmas ornaments began.

Our first Christmas ornament was a unique glass water droplet that we bought to send to our best customers. “I researched and found hand-blown glass water droplets, which seemed very fitting for an irrigation company.  We tied a small, preprinted card onto each with a thin silver ribbon,” says Diann Ilkenhons, Senninger’s marketing manager.

Senninger Vice President and Co-Founder, Mark Healy, spearheads this initiative each year. He says that we began molding the ornaments because it allowed us to “customize them with our name and the year and mass-produce them to send them to many more customers.” This also involves numerous people throughout the organization, making it a team effort –engineers, tooling, molding, QC, production, marketing, sales, and shipping.

We initially kept the design to a flat ornament made in a single cavity mold.  We moved to designs with hand-painted sections, and then we developed more creative designs that involved multiple molds. We added color using pad printing and most recently began using laser printing.

Employees often suggest designs. The train in 1996 was proposed by one of our founders who was a train enthusiast.  The employee who suggested the 2011 sled purchased an authentic “Radio-Flyer” sled and gifted it to Mark Healy.

The 2012 design of the dimensional water droplet was a version of our golden droplets created to commemorate our 50th anniversary.

Our customers often praise ornaments that require assembly, like the challenging 2015 multi-colored soccer ball that was made in honor of the U.S. women winning the World Cup Soccer Championship that year. On those, we include printed pictorial assembly instructions.

We have customers that have collected every one of the Senninger Christmas ornaments. Many customers ask for extras to give to their employees.

This year’s ornament is the most complicated thus far – a “Senninger-Flyer” red wagon with tires that roll.

“Every year, they seem to get more fun to work on,” says Mark Healy. Making the Senninger Christmas ornaments is truly a labor of love that we all enjoy.