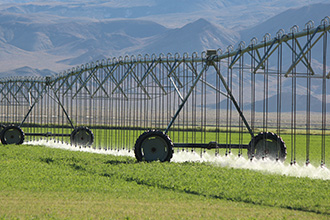 Global issues like declining water availability and high energy costs are becoming a major concern for irrigators in a world affected by dwindling natural resources.

American growers looked at LEPA (Low Energy Precision Application) technology, which was developed in the 1980s, and began testing different ways to use these sprinklers heads.

The technology was already known for its ability to reduce wind-drift and evaporation loss dramatically, so growers began installing this technology in new ways to see if they could increase the benefits.

What began five years ago as an experiment is now an award-winning technology found on farms across Western and Central United States. Now known as LEPA Close Spacing, it is gaining interest outside the USA in Mexico, Brazil, South Africa, and the Middle East’s dry regions, areas where water is regulated, and among forward-thinking growers looking to produce good yields with significantly less water and energy.

LEPA originated from a collaboration of researchers from Texas A&M and Senninger Irrigation, a U.S. sprinkler manufacturer. The applicator was designed to deposit water near the soil surface at low pressures ‒about 18 to 24 inches above the ground‒ to help prevent wind-drift and evaporation. Cotton growers originally used it in the western high plains of the United States.

In those early LEPA systems, applicators were mounted far apart to irrigate every other furrow. Since this precision application wetted less than half the soil surface, it helped reduce the effects of evaporation, making LEPA 95% efficient in water use.

The new Close Spacing method adjusts the spacing between heads to 40 inches or less between heads. This adjustment allows growers to maintain the benefits of lower wind-drift and evaporation loss and reduced pumping costs while also obtaining:

LEPA Close Spacing has proven so effective that in 2017 the Irrigation Association selected “Close-Spaced LEPA Installations: Saving Water and Energy and Increasing Yields” as the winner of their new Vanguard Award. This award was launched in 2017 to honor a project executed by a team of individuals, companies, organizations or other group entities that have executed an innovative installation project in the irrigation industry.

LEPA Close Spacing bubblers produced an average of 21.5% more bales and tonnage by 6.5% during four cuttings over the season on three center pivots. The grower attributes these yield increases to the water application of LEPA Close Spacing heads. The water application rests on the soil surface and slowly infiltrates, producing lateral water movement in the soil and leaching of salts beneath the root zone.

“The groundwater basin here is depleting like most in any heavily irrigated area. It became a concern. So when we started using these and saw what they would do to cut that out, that was a big motivation for me, because it's all about efficiency. We found out real quick that we've got more water in the ground and that we could actually cut back on the amount of water.” said John Maurer.

“We started seeing the difference in the hay growth. Very seldom do we ever get more hay second cutting than first. On one particular field, we put the bubblers on right after the first cutting, and for the second cutting in thirty days, we had forty more bales on one pivot.”

He continued, “This year when we got the soil samples back, we flushed out a bunch of sodium. We've gone from like 2.6 down to 1.6, which is pretty substantial. It was the first time that we've ever been able to move salt. Now that we have the ability to push water down and flush it out of the root, we can move off salt. I'm excited about what we're going to be able to do to these fields as we continue to push the water into them.” 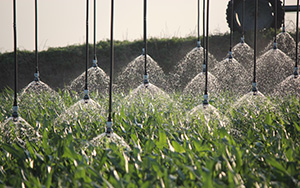 On another Vanguard Award participant’s farm in Mingo, Kansas, (Elevation: 3159 ft, Soil Type: Silt Loam) grower Bob Holloway was able to farm 50% more corn (a total of 120 acres) with just 250-300 gpm thanks to LEPA technology. “The situation that we were in required us to either give up one irrigated circle or find a more efficient means of irrigating,” he said.

“I found that with the LEPA bubbler system, it allowed us to apply the water we have available in a more productive way. The water that is being applied is resulting in less surface moisture and more beneficial subsoil moisture. This should be all producers’ goal.”

Irrigation distributors also see the benefits and increased popularity of LEPA Close Spacing. Vanguard Award participant Rick Grimes, the owner of Southwest Irrigation in southwest Arizona, stated that almost 99% of their sales could be attributed to LEPA technology. In Arizona and the Imperial Valley, California summer weather brings temperatures of 118-120 °F, and ET rates range between six-tenths to seven-tenths of an inch a day. This means a farmer with 320 acres of land will need a minimum of 12 gallons of water a minute per acre just to offset the ET rates in June, July, and August.

In their experience, a LEPA sprinkler closer to the ground uses less horsepower and less pressure to achieve the same results as traditional sprinklers that are 3, 4, or 6 feet off the ground. Meaning LEPA Close Spacing lets growers irrigate more hectares and save money because they can put more water on the ground more efficiently and get a more uniform crop with it.

According to Rick Grimes, “30-inch [76 cm] spacing will come out traditionally between 98 and 99% uniformity and distribution of water applied. You can't get that with the sprinkler that's ten feet [3 m] apart and five feet [1.5 m] off the ground."

Rod Stilwell, another Vanguard Award participant, has been with American Irrigation in Garden City, Kansas, since the year 2000. Weather conditions in this area are usually windy and dry. “The main crops around here are corn, wheat, soybeans, milo, alfalfa, and potatoes. With Close Spacing, growers are seeing that they can shut down their systems more often, therefore saving water and energy. It's a cost-effective way to produce good yields.”, he said.

LEPA Close Spacing systems work better in relatively flat fields with a slope no greater than one percent. Circle planting is recommended to keep the applicator centered in the furrow, which not only works to control run-off but also to avoid wetting the crop canopy. Strip-till and no-till practices further help keep the water in the rows and allow for better conditions to preserve the soil moisture, minimize evaporation and protect the row from drying out. 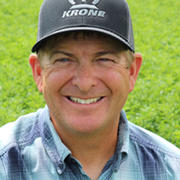 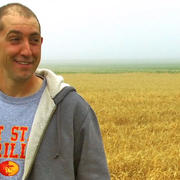