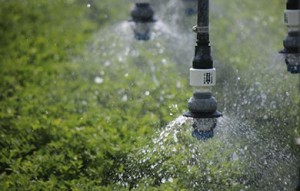 Unfortunately, these concerns are far from diminishing, with unpredictable rainfall, increasing temperatures and rising demands for energy and water.

Keeping farm profits sustainable and at the same time meeting the growing need for more food, will require the combination of more efficient farming practices and new irrigation application technologies.

Combining the efforts of researchers, manufacturers and growers, Close Spacing irrigation has been gaining ground in many dry regions across the US.  Growers have seen about 25 % in water savings while also enjoying increased yields.

They are also adopting this practice in areas where water is beginning to be regulated, or simply as a means to increase yields.

Just like other irrigation solutions, close spacing came about from an ongoing contact with growers and researchers, a strategy that has enabled product development and installation variability to meet specific needs.

Traditional LEPA irrigation helps reduce evaporation losses. In LEPA systems, applicators are mounted far apart to irrigate every other furrow, which translates to a precision application that wets less than half the soil surface.

A few years ago, growers in northern Texas looked at combining conservation tillage practices with LEPA heads but closing up the drop hose spacing. Water distribution over most of the soil surface increased the application efficiency; crop residue held the water in place, allowing it to soak in and fill the soil profile.

The versatility of bubble sprinklers, such as the LDN® with its bubbler pad and shroud, offers growers the opportunity to combine spray application with bubble application at various crop stages. Bubble sprinklers also alter height off the ground, the spacing of the first spans and the application rate by irrigation cycle.

Close spacing adoption by growers across the country is reliable evidence of the effectiveness of the practice. In addition to growers’ enthusiasm, close spacing and LEPA technology have also attracted the interest of several researchers.

Leon New and Guy Fipps of Texas A&M determined that with LEPA sprinklers, at least 20 percent more water will reach the soil surface than with conventional spray nozzles. This technology has been used primarily for row crop irrigation with application efficiencies typically exceeding 95 percent.

As part of the Irrigation Sustainability Component of the Canada-Saskatchewan Agricultural Green Plan Agreement, a study was initiated in 1994 to evaluate the potential of implementing LEPA technology in Saskatchewan.

A recent publication described an irrigated cotton field trial that included Senninger nozzles used for LEPA instead of traditional flood irrigation. The trial was developed at the USDA-ARS’s U.S. Arid-Land Agriculture Research Center in Maricopa, Ariz., where once again the declining of water supplies is calling attention to more efficient systems.

PARM is based on LEPA and close spacing principles that promote better irrigation practices that save water and energy and produce better yields. 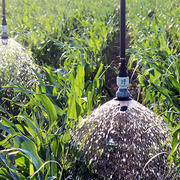